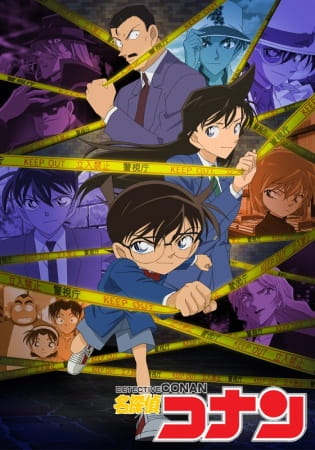 Kudo Shinichi is a seventeen year-old high school detective whom people call the "Modern Sherlock Holmes." However, one night after a date with his childhood sweetheart, Ran, Shinichi witnessed an illegal trade and, caught off his guard, was knocked unconscious and fed a drug that was supposed to kill him... but he woke up and found himself shrunken to a seven year-old. In order to track down the men who did this to him, Shinichi hid his identity and lived with Ran, whose father happened to be a hopeless detective, and with that came a series of murders and mysteries that he must solve.

Detective Conan is one of those animes that will make you start guessing, thinking, and probably develop your logic at some point. The only problem is that Conan is seriously really, really long, and at some points, we might get unmotivated to watch it episode by episode. Some of it is episodic, others are not, which makes watchers afraid to skip several episodes in fear that they might miss a story to the bigger plot.

However, the good thing about it being so long is that they’re so many hard cases with interesting conclusions that for those of you who enjoy Detective movies/animes, like me, it never gets old. In fact, I’d say that Conan is the best detective anime I've ever come across. The bigger plot is also well thought out and interesting, clues and hints sometimes coming out of smaller plots to form an "invincible" organization vs. Conan (or Shinichi).

The sound is the best, well known voices could be heard for Shinichi and Conan's characters, the emotions are portrayed thoroughly thought them too.

Minor or cameo characters like Kaido Kid never fail to amaze you, they're tricks are broad and though you might think you can spot a pattern in the cases, there's always this one or two episodes that breaks the pattern completely.